Thyroid – the switch to your metabolism

Continuing on the exploration of the reasons behind tiredness, let’s take a look at one of the key players: the thyroid gland – responsible for the metabolism of every cell in our body.

The hormone the thyroid gland produces (thyroxin) is like an on-off button for all our cells. The thyroid gland is the body’s internal thermostat, regulating temperature by secreting two hormones that control how quickly the body burns calories and uses energy.1

In Hypothyroidism there is a defect in the production of tetraiodothyronine (T4) and /or triiodothyronine (T3), which results in a hypo-metabolic state.1 It results in elevated thyroid stimulating hormone (TSH) and may lead to enlargement of the follicles in the gland, creating nodules. These nodules may be benign, but may also calcify, grow blood vessels and become cancerous.2

Thyroid problems primarily affect women, possibly due to the close relationship between estrogen and thyroxine. It is estimated that one in eight women will develop thyroid problems at one stage of her lifetime.3 Age must have a part to play also, as with each decade the risk of developing thyroid nodules for example increase by 10%, i.e. if a woman is 40 years old, she has 40% chance of developing enlarged thyroid cysts, which increase to 50% when hitting the 50’s.4

Due to decreased body temperature, it is claimed that bodily enzymes function at an impaired rate which can lead to over sixty different signs and symptoms, including: fatigue, low blood pressure, cold hands and feet, weight gain and difficulty loosing it, constipation, fertility problems, low stomach acid and malabsorption with related digestive discomforts, slow hair and nail growth, water retention, dry skin, depression … just to name a few. As thyroxine is needed in all cells it can affect any part of your body.1

Hypothyroidism may be primary, due to thyroid gland defects, or secondary, due to pituitary gland problems (which stimulates the thyroid gland to produce hormones).1 But multiple factors may affect the hormone’s job in the periphery – the conversion level or at the receptor sites in target tissues and these are most common issues I meet with in my clinic.

A simple iodine, selenium and Zinc deficiency can be behind the problem.5,9 Iodine is part of the thyroid hormone (as its name shows), yet excess iodine intake can block thyroid function.6 Both selenium and zinc is required to activate the hormone, or convert T4 into T3.7,8 If the normal blood tests your doctor ran came back perfect, but you still have the typical symptoms, you could have what is called Wilson’s syndrome, or subclinical hypothyroidism.  It is said to be due to the impaired conversion of T4 to T3. Various factors can cause T4 to be converted to REVERSE T3 (an isomer –differently structured molecule, therefore inactive) instead of regular T3. As Reverse T3 levels rise, it can block the conversion of T4 – further perpetuating the condition. It is called “Reverse T3 Dominance”. Causes of this phenomenon are either nutrient deficiencies / malabsorption due to digestive disorders or food allergies. This conversion happens in our liver and kidneys, therefore the health of those organs have a huge impact on our metabolism. 11

Prolonged stress can deplete the raw material for the thyroid hormone, for example the amino acid Tyrosine (from proteins), and stress hormones can interfere with Thyroxin production and its utilisation at three different levels. Cortisol may also induce blood sugar imbalances, and visa versa; blood sugar imbalances may lead to higher cortisol output, and also increase the growth factor, IGF-1, leading to nodule formation. On the other hand, low thyroid function (even subclinical) predisposes to higher cholesterol, glucose, insulin levels.15-17

Environmental toxins have a major impact on thyroid function. One of the most investigated such compound is the inorganic fluoride added to our drinking water as it is considered beneficial for our dental health – although in large amounts it has been deemed neurotoxic.25 Even in legal amounts it has been associated with higher prevalence of hypothyroidism. A recent epidemiological study highlighted that areas with higher levels of fluoride in the drinking water were nearly twice as likely to report high hypothyroidism prevalence in comparison to the non-fluoridated areas.26 Further clinical trials reported that fluoride has impacts on TSH and T3 hormones even in the standard concentration of less than 0.5 mg/L.27

Autoimmune thyroid conditions as Hashimoto’s thyroiditis and Grave’s disease (the latter results in hyperthyroidism) are becoming more and more prevalent, with gut flora imbalances, digestive discomforts and gluten sensitivity at the background. These are identified by anti-thyroglobulin (TG) and/or anti-thyroid peroxidase antibodies (TPO) beside an elevated TSH. (Bare in mind that in many cases the TSH may be within the very wide range of “normal” levels, what is called sub-clinical hypothyroidism.11) Auto-antibodies may also develop towards TSH receptors. The immune system is regulated in the digestive tract and any imbalance there due to C-section birth, lack of breast feeding, antibiotics, contraceptives, antacids, gallbladder/liver problems, high carbohydrate diet or stress – coupled with a potential genetic weakness may lead to autoimmune conditions, where the immune system attacks the body’s own cells.

Gluten has the ability to increase intestinal permeability, allowing toxins and undigested foods into the blood stream, driving any chronic disease. Coeliac disease is highly associated with many autoimmune conditions – but even non-coeliac gluten sensitivities are common. Although the literature does not support the routine use of gluten-free diet, Hashimoto’s thyroiditis is more common in Coeliacs, and with a strict elimination diet there was a normalization of subclinical hypothyroidism, suggesting that in distinct cases, gluten withdrawal may single-handedly reverse the abnormality.18-19

When it comes to the thyroid, gluten plays a role in what’s called molecular mimicry; the cross-reaction of the antibodies with autologous components.  The molecular structure of gliadin, the protein portion of gluten, closely resembles that of the thyroid gland. When gliadin breaches the protective barrier of the gut, and enters the bloodstream, the immune system tags it with antibodies for destruction. These antibodies however due to the close structural similarity may also cause the body to attack thyroid tissue.18

Certain microbes were also implicated in molecular mimicry.20-23 An intestinal bacterium called Yersinia has been found to share identical amino acid sequences when compared to the TSH receptor, thyroglobulin, TPO, and the sodium iodide symporter.  Another organism, a spirochete called Borrelia burgdorferi known for causing debilitating or a-symptomatic Lyme disease, has also been implicated, and so was Toxoplasma gondii, the cat-litter bacteria. How do you know if you have these bugs? You don’t, unless you run highly specific private tests.

The solution – not one-size fits all

There are many contributing factors in developing hypothyroidism, and there is no simple one size fits all solution to the problem. Taking synthetic T4 such as levothyroxine medication may reduce TSH, but in most cases not only do very little for the overall symptoms, but in the long run it affects the microbial balance in the gut, which is one of the main driver – if not the root of the problem. It also contains gluten, lactose and aluminium – all may prove problematic.24 Finding your individual imbalances with functional laboratory tests and addressing them is the only real solution. Improving stress response, reducing inflammation, correcting digestive functions, repairing the gut, liver, kidney and thyroid tissues and / or balancing female hormones are some of the steps we may take.

Contact me to find Your ‘root’ to better health!

Soak seaweed in hot water for 10 minutes. Grate the carrots and Jerusalem artichokes. Discard soaking water from the seaweed (you may water your plants with it) and rinse with cold water. Mix all ingredients, season to taste. Season the salmon darns and steam for 5-10 minutes until firm but not dry and flaky. Serve on top of the salad, garnished with some of the fresh herb (optional). 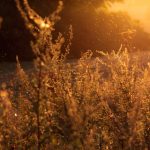 Fats – This Is Why You Should Ditch The Low-Fat DietFeatured, Superfoods